WikkaWiki is a flexible, standards-compliant and lightweight wiki engine written in PHP, which uses MySQL to store pages. Forked from WakkaWiki. Designed for speed, extensibility, and security. Released under the GPL license.Features: things you can do with Wikka.System requirements: what you need to install the package.The Wikka showcase: featured websites powered by WikkaWiki.Wikka sites: a comprehensive list of Wikka-powered websites in 37 languages.Wikka reviews: what people say about Wikka.See Wikka in action! 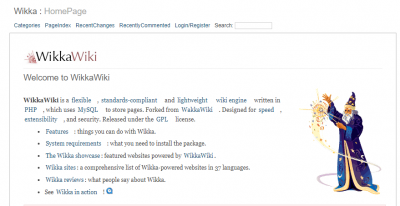